This brief post identifies a common mistake made by students when writing academic assignments. It concerns the incorrect use of the comma in sentence construction.

Let’s get the technical, grammatical jargon out of the way. Run-on sentences and comma splices indicate compound sentences that are not punctuated correctly. A run-on sentence has at least two parts; two or more independent clauses that have been joined together incorrectly. A comma splice denotes when these  distinct sentences are joined together by a comma.  Some definite rules can be followed when writing sentences, in order to avoid punctuation errors: 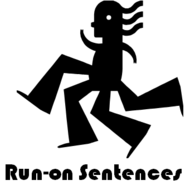 The argument is confusing, the language used is obscure and verbose. Incorrect

The argument is confusing. The language used is obscure and verbose. Correct

The argument is confusing; the language used is obscure and verbose. Correct

If there is continuity of thought between the two clauses, using a semi-colon might be more appropriate than a full-stop. Alternatively, insert a conjunction.

The argument is confusing, as the language used is obscure and verbose. Correct

In this instance, a comma can be used before the conjunction.

Girls perform better than boys in mixed schools: they consistently get better grades in the Leaving Certificate. Correct

These rules might seem needless and pedantic; but try to read an entire essay full of run-on sentences and you’ll feel like you’re participating in a run-on marathon.  Mastering the simple rules above will improve the legibility and readability of your essay; and will ensure that your argument is presented in a clear, concise manner.